You are here: Home / Writing / Writers Don’t Think They Have Something To Say 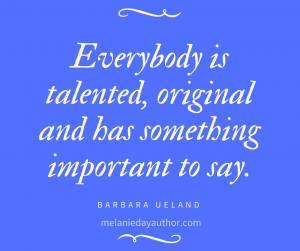 So many people idealise about writing a book. They have grand plans to leave a legacy, share their story or help others. How many do you think actually achieve those lofty goals?

I don’t know either but I’m willing to guess very few end up with a book in print.

One thing that stops them in their tracks is, “there’s nothing different about me or my story” or “it’s already been written much better by others – who’d want to hear from me?”. Those are just two of many responses I get from my writing classes.

Barbara Ueland, captures these inhibitions well. in the quote above. She was a firm believer, after teaching for many years, that everyone has a talent, is original and has something to say that’s important.

Following scientific research, she considered that there were no two people who were exactly alike – even in twins. If you speak from your own point of view and be authentic then your writing is entirely original even if there have been countless others writing about the same topic. No-one can say it quite like you. And what you have to say is important for others to learn and for you to express your creativity.

So if you truly do want to write, banish yourself of the critics both inner and outer and put pen to paper (or fingers to keyboard) and get those words down on the page. Once you break through the barrier of actually writing something then you can focus on writing it well.